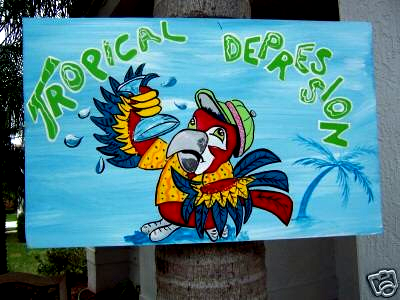 As we know from Tanya, depression comes from Nefesh Ha'Bahamis, and it takes Nefesh Elokis to battle. So much the harder this is to do so for those who don't have the latter.


Interfax: A ferret and a monkey ran away from Chita's cirque chapiteau, followed by an Australian necklace parrot.

As the creative director of the circus Janna Lazerson told to news reporters, the cause of the escape is depression caused by bad weather: "We think that the animals escaped due to depression, since it has been raining hard in Chita."

According to Lazerson, only the monkey was found. It was discovered sleeping in a cage with a dog, which the monkey was hugging in its sleep. The two other escapees have not been found yet.

Creative director of the circus explained that the parrot is missed by the female parrot, who was his partner during the show. According to Lazerson, the trained ferret could go for a visit to one of Chita's families. She mentioned that the main features of the ferret are laziness and gluttony.

Representatives of chapiteau hope that in the nearest time, the ferret and the parrot will return to the circus.

I can't figure out if this is for real or a joke.

Update: according to this article, the ferret was discovered in the city park by one of the city's citizens. The ferret was hand-trained and friendly, "knew how to open doors and responded to a clap on the leg". (The reason why in the above article it was hypothesized that it would go looking for humans is that it is both lazy and gluttonous and thus seeks human contact. I was planning to make some politically incorrect joke here about liberals and minorities, but felt too lazy to do it...) It was brought to a local zoo, where it was fed and put to bed, until the owners of the circus came to claim him.

The parrot is still missing. Its female friend really misses him. If the parrot is reading this, he should consider at least sending her a message.

P.S. I am really annoyed at how unbalanced the colors and brightness/contrast are in the above picture, but I don't have ImageJ on this computer. I will fix it when I get home, iyH.

P.P.S. The bottom line is: even the animals are depressed in Russia. I mean, sure, blame the bad weather. I don't hear of animals escaping English zoos.
at 2:20 PM