I have written about this before, so I know I am repeating myself, but just as an illustration to the pictures below...

Oftentimes, I hear "they are just doing their job" about the actions of police officers (or TSA officials in the airports). In what way is that an excuse? A hired killer is also "just doing his job". If the policeman's job is to follow his superiors' orders to rob and murder people blindly, without a thought, then he is not a human being; he is just a mindless beast, and defending against his actions using whatever force necessary is completely legitimate.

The whole astonishing innovation of Nuremberg Trials was that people following their democratically elected government's orders can be criminals, and "I was just following orders" does not absolve one of responsibility.

People in both these picture were "just doing their job". Notice both the main figures and their colleagues, who are looking on. All are criminals. 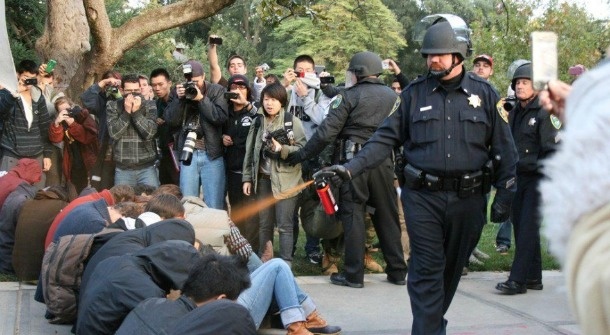 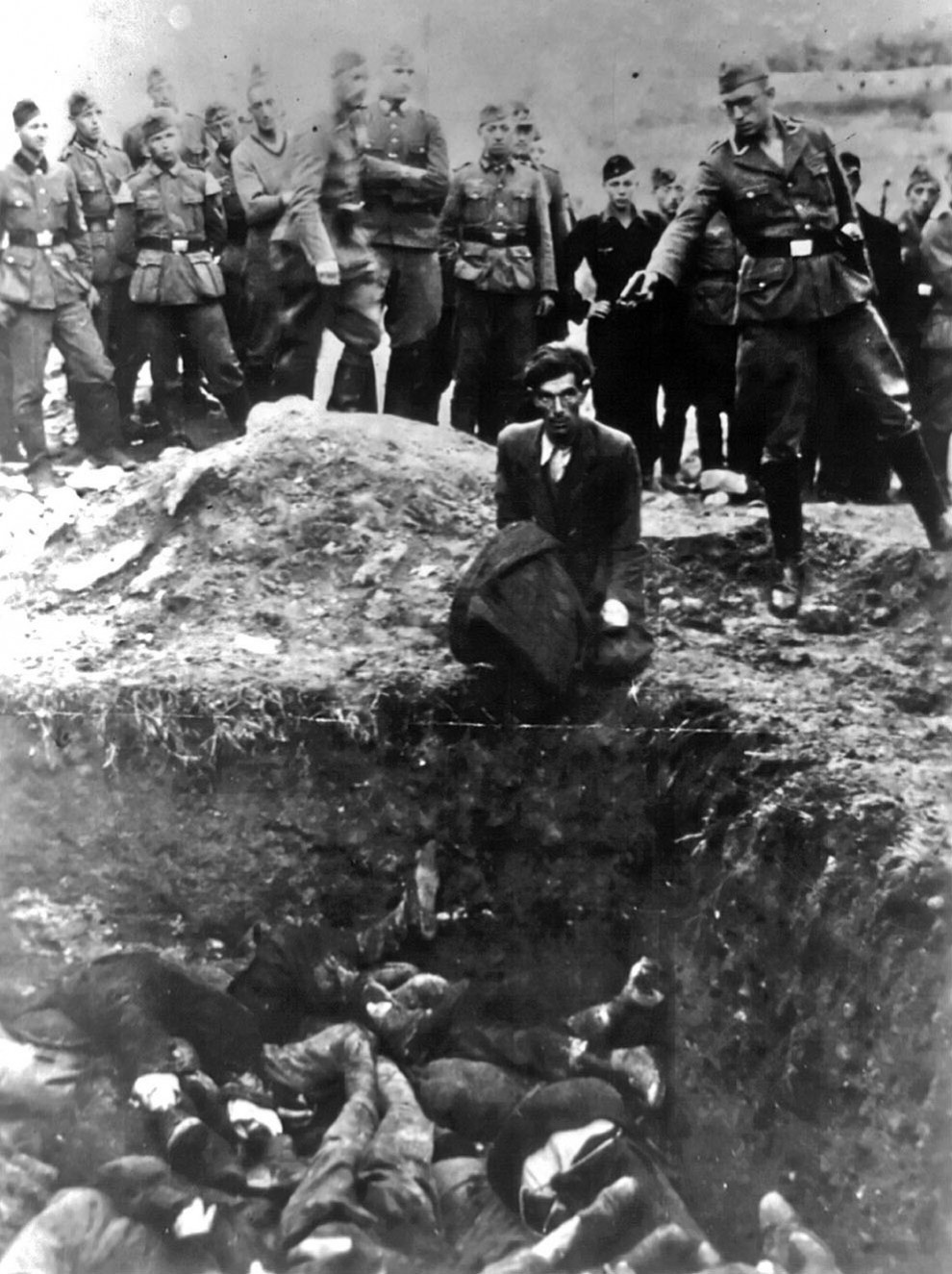 Police officers who did not rescue a drowning man in this video were also just doing the job and just following instructions:

And looking at the following picture, I am reminded of an opinion of one of acharoinim that "the worst government is better than anarchy". I guess he lived before the 20th century. Even the worst "private" thugs and criminals don't commit the atrocities that government thugs are capable of: 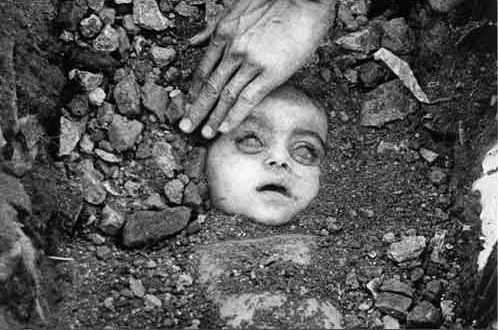 The inglorious side of war 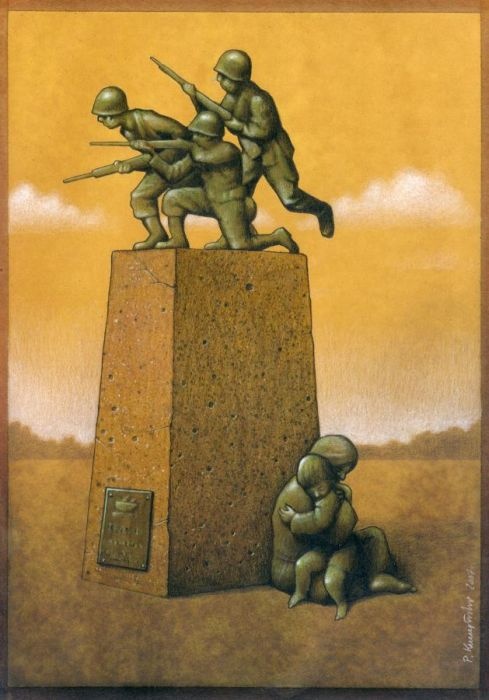 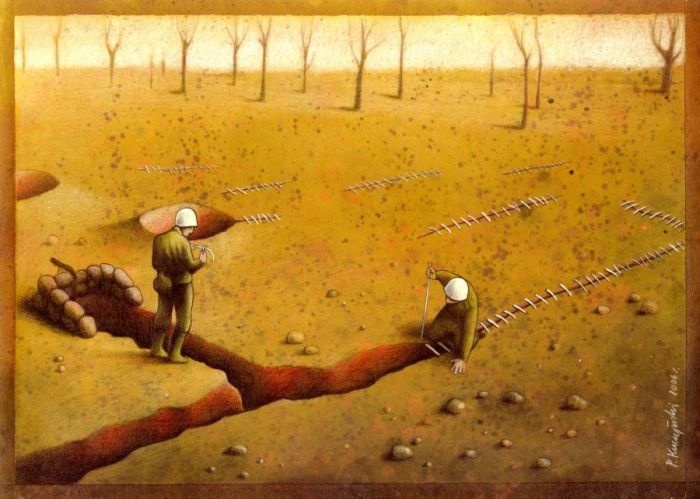 This one is also an illustration of the relationship between the civilians of the world and their governments: More from the artist (links taken from the above source):

I didn't like all of his works due to their obviously socialist leanings (it seems today, just like 100 years ago, you are either in favor of the corrupt establishment or against everyone equally), but I also liked these: (in Russian, and possibly in Polish, the word for the rook chess piece is ladya which was the name for Russian medieval warships, similar to Viking ships)
at 10:09 AM No comments: Links to this post

Without the government, who would regulate traffic?

I heard once from someone working for Goldman Sacks (or JP Morgan, or one of those other lowlife beehives) that "deregulating economy would be like turning off all traffic lights".

Also i hear from people that "without the government, there would be a balagan".

Well, what really happens when you get rid of traffic regulations? Massive accidents, right?

More on the topic of privatization of roads and highways from Walter Block:

Conservatism and mistrust of spontaneous order

A brilliant quote from Friedrich Hayek's essay "Why I Am Not a Conservative" (note that in Hayek's lexicon, "liberal" means what we today mean by "libertarian"):


In looking forward, [conservatives] lack the faith in the spontaneous forces of adjustment which makes the liberal accept changes without apprehension, even though he does not know how the necessary adaptations will be brought about.

It is, indeed, part of the liberal attitude to assume that, especially in the economic field, the self-regulating forces of the market will somehow bring about the required adjustments to new conditions, although no one can foretell how they will do this in a particular instance. There is perhaps no single factor contributing so much to people's frequent reluctance to let the market work as their inability to conceive how some necessary balance, between demand and supply, between exports and imports, or the like, will be brought about without deliberate control. The conservative feels safe and content only if he is assured that some higher wisdom watches and supervises change, only if he knows that some authority is charged with keeping the change "orderly."

This fear of trusting uncontrolled social forces is closely related to two other characteristics of conservatism: its fondness for authority and its lack of understanding of economic forces. Since it distrusts both abstract theories and general principles, it neither understands those spontaneous forces on which a policy of freedom relies nor possesses a basis for formulating principles of policy.

Order appears to the conservative as the result of the continuous attention of authority, which, for this purpose, must be allowed to do what is required by the particular circumstances and not be tied to rigid rule. A commitment to principles presupposes an understanding of the general forces by which the efforts of society are co-ordinated, but it is such a theory of society and especially of the economic mechanism that conservatism conspicuously lacks.

Many people are reluctant to trust the "market forces" probably because they envision them to be some chaotic combination of random vectors, like all the wind currents that propel a falling snowflake. But in reality, "market" is not just some chaotic forces; it's literally millions of individuals making decisions based on their needs and desires. Many of them do so as a part of their profession, in which they have been proven to be successful (by making profit both for themselves and their clients; and while I don't think that profit or money in general are "be-all and end-all", certainly, profit is a good evidence that an entrepreneur is successful at predicting public's desires).

On the other hand, government's regulations are a product of only a handful individuals (whose main skill is oftentimes simply oratory), themselves isolated from profit and loss or competition, making decisions (backed up by a threat of violence) on behalf of millions of people.

So, the market may "not be perfect" (whatever that accusation means), but it's definitely better than the government.


Let me return, however, to the main point, which is the characteristic complacency of the conservative toward the action of established authority and his prime concern that this authority be not weakened, rather than that its power be kept within bounds. This is difficult to reconcile with the preservation of liberty.

In general, it can probably be said that the conservative does not object to coercion or arbitrary power so long as it is used for what he regards as the right purposes. He believes that if government is in the hands of decent men, it ought not to be too much restricted by rigid rules. Since he is essentially opportunist and lacks principles, his main hope must be that the wise and the good will rule – not merely by example, as we all must wish, but by authority given to them and enforced by them. Like the socialist, he is less concerned with the problem of how the powers of government should be limited than with that of who wields them; and, like the socialist, he regards himself as entitled to force the value he holds on other people.

When I say that the conservative lacks principles, I do not mean to suggest that he lacks moral conviction. The typical conservative is indeed usually a man of very strong moral convictions. What I mean is that he has no political principles which enable him to work with people whose moral values differ from his own for a political order in which both can obey their convictions. It is the recognition of such principles that permits the coexistence of different sets of values that makes it possible to build a peaceful society with a minimum of force. The acceptance of such principles means that we agree to tolerate much that we dislike. There are many values of the conservative which appeal to me more than those of the socialists; yet for a liberal the importance he personally attaches to specific goals is no sufficient justification for forcing others to serve them. 
"My sword is longer than yours; hence, you have to obey my will"
— what most arguments in favor of the government's legitimacy amount to

Oftentimes, one hears the "consent" argument as a justification for the necessity and moral imperative of keeping the government's laws.

For instance: "You live in America (Canada, New York, Hicksville, etc.); therefore, you have to obey the laws. If you don't like the laws here, go live somewhere else." (A tangential note: the "laws" in this case means "whatever the government said", not "what people's custom is". The distinction is important, as will be seen below.)

Or: "People must obey the ruler's laws, because by living on his land, they showed that they accepted his authority over them." (This argument is used by some halachic authorities regarding dina d'malchusa dina.)

Why do people fall for this argument? Because they mistake positive law for natural law. They assume that "whatever the government said" is equivalent to "how most people behave". In many cases, as I previously explained at length, it is true: the positive law (although illegitimate to begin with) eventually creates patterns of behavior. For instance, if someone wants to drive on the left side of the street, he should go live somewhere else, since most people drive on the right side of the street in this country. Out of respect for the majority of the people (whose custom "was there first"), one must obey the local natural laws (whether or not they arose spontaneously or resulted from oppressive positive law).

But this in no way means that, for instance, tinting your car windows more than 35% (which is illegal in some states) is being disrespectful to local people, just because some local bureaucrat decided to forbid it.

Hence, if I claim that some bully (whether he is an elected politician or a local mafia boss) is illegitimate and, therefore, his laws are illegitimate, telling me that "I live on his turf, therefore, I have to listen to him" is illogical. I live on what he claims to be his turf (with support of some people), but that in no way makes his claim legitimate, unless the "turf" actually is his property which he can prove to have homesteaded.

Which brings me back to dina d'malchusa dina: the above analysis shows that the "tacit consent" argument and "king the landowner" argument are in fact one and the same. Without the second, the first one falls through. But, it seems to me, that if the consent argument is presented as some sort of chiddush, or at least as a shitta standing aside from the "king the landowner" argument, then the consent argument is simply fallacious.
at 1:00 AM No comments: Links to this post